A Little Bit Of Lota

The weather is getting better here in Conce - you can actually say that it's Spring now. The sun is out and temps are hitting 18c, flowers are coming alive, and the poor street dogs are getting some respite from the cold, wet weather. The same goes for me, as I need to dry out thoroughly from the wet months in this city. With another long weekend in Chile, there was the temptation to go far a field and use the three days to their fullest, but I decided on something a little more local - see what I can here before the big trip. Yes, that big trip is coming - the countdown has began, and it's less than 2 months away!

My weekend jaunt this time took me to a coastal town called Lota, about 35kms south of Concepcion. Sadly Lota is not much to look at. There is a beach, La Playa Blanca (White Beach), but the beach front was empty of people and had a dilapidated and run-down look about it - closed restaurants that haven't been opened in years if not decades, the cold ocean always pounding in at the sand, and the occasional wandering dog. Lota wasn't always a forgotten place somewhere in the middle of Chile. In fact, it IS the geographical mid-point of the country (not including the territory that Chile owns in Antarctica), and there is even a sign announcing this fact to all the tourists (just me). Am I the only person who is interested by these things? I have stood in the dead-centre of Spain (which happens to be in Plaza Meyor in Madrid), the most eastern part of mainland Australia (Byron Bay), Greenwich in London and the old 'Time 0' line in the Canary Islands. Aside from this interesting fact, Lota is also home to the World's only under-sea coal mine which was written about by Chilean writer Bladomero Lillo in his 1904 novel 'Subterra,' and also featured on the big screen in the 2003 film of the same name.

The book, and movie, talk about the dangerous and hard working conditions that the workers faced in the mine. The mine, called 'El Chiflon del Diablo,' translated as 'The Devils' Breath,' operated between 1857 and 1990, and was built and run by Matias Cousiño Jorquera, and in it's heyday it was pulling up 250 tons of coal per day. It's 850 meters deep and due to it's inclination is one of the few naturally ventilated mines in the World. I have been down a mine before, Big Pit in Wales, but it is always exciting and different. I was expecting all of my electronics to be taken off me as they did in Wales, but we were allowed everything - just asked to leave lighters above ground, but nobody checked. So, being Chile, there were selfies to be had, and had they were - in the changing room, helmets on, on the lift ride down, and down the mine... basically everywhere. It was difficult going down there, as it was a very confined space even by Chilean standards where the buses aren't my size. Go went down, 6 people packed in a 1 m2, slightly shaky metal lift, water dripping around us, and into the Devil's belly.

The guide gave a good talk, and took us to a few places in the mine and explained many interesting facts about the mine. The reinforcement used in the tunnels are from Eucalyptus trees, chosen for their resistance to the downward pressure and also their flexibility. As per most mines, safety wasn't really an issue for the owners - canaries were used to test the level of toxic gases - if tweetypie dropped off his perch, you ran or did the same. Workers did 7am - 7pm shifts, 6 days a week (Sunday was for church) in complete darkness usually, and basically never saw the sun. Kids also worked down the mine, and started at at 11. The guide also did the usual things of asking you to turn off your headlamps (and mobiles!) to see what it would have been like - the phrases 'can't see your nose in front of your own face' fits perfectly. It is complete pitch darkness, no two ways about it - like the Devil himself swallowed up the light. The village where the workers lived was partially rebuilt for the movie and is still there to allow you a glimpse of the past. The local store is also there, with all the old packaged products, and was the only place you could use your vouchers that you were paid in - you bought everything there, so all the 'money' went back to the mining company. The mine was declared a National Monument in 2009 and opened it's doors to the general public. It was also damaged in the 2010 earthquake, but has since been repaired, but all the time I was down there I was trying very hard not to think about it! 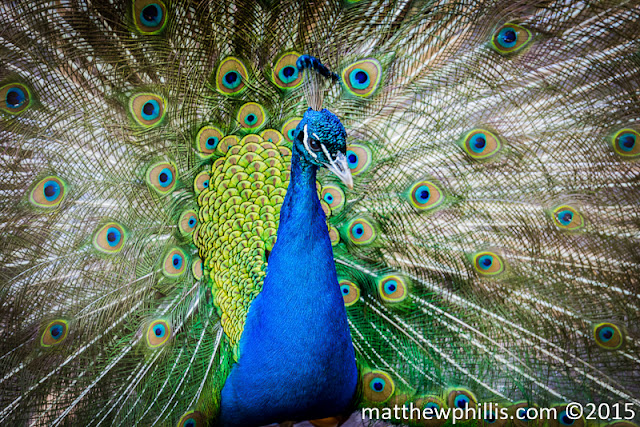 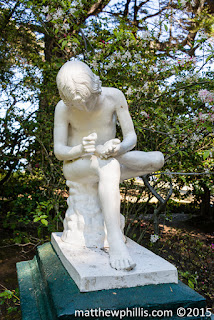 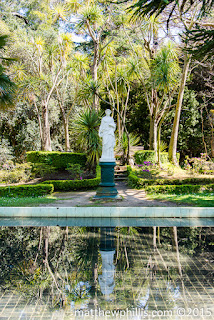 Up on the hill in Lota and out on a peninsula is Parque Isidora. This park was started by Matias Cousiño, the mining magnate himself, and was taken up after his death by his son Luis. A very noble gesture, Luis decided that the park would be a gift for his wife Isidora, and brought in plant species from Europe. It was designed by an Englishman, and has statues, small gardens and fountains. One small pond in the park has no fountain, the water sitting like glass, and the tiles are black - this is to reflect the stars at night for easy viewing. There are numerous statues, 20 in fact, including a "Diana The Huntress" and an interesting one of a child pulling a splinter from his foot. The latter is called "Niño de la Espina," and is a replica of the 1st Century AD sculpture in Rome, and is said to represent the Roman shepherd Gnaeus Marcius , ordered to deliver an important message to the Senate who ran a long way ignoring the thorn from his foot until he accomplished his mission. The house that the happy couple were to live in was also built in the park, but sadly Isidora died in Paris, presumably shopping for a door handle for the house with her best friend, before she had the chance to live in it. The park has a commanding view of the sea and of the beaches of Lota, and there is even a lighthouse, but sadly the house is no longer there - it was damaged in the 1960 earthquake and then completely demolished by the mining company.

I have spoken before about the 'real' Chile. Lota is the real deal. There are loads of poor houses, they look like they have been built by the people living in them by scrounging anything they can find - tin sheets, planks of used timber, wire. Hungry dogs wander the streets and kids play on dirt football pitches, vultures soaring around the cliffs looking for food. The seaside is supposed to be a happy, warm place, but sadly due to the Pacific bringing up the cold Antarctic current, Chile will never have warm beaches. Imagine the water was warm. All of the poor villages, the big factories and oil refineries that now slump on the coast would be replaced by caravan parks, holiday-makers getting drunk and burnt on their rented deck-chairs, bad souvenir shops and big resorts... ok, so maybe it isn't too bad to have a cold ocean. It is still sad to think about though, as it could be absolute paradise with the mountains in the background too. Sadly, anything that people touch in Chile pretty much gets ruined.

In saying this, I have to admit that sometimes what people do in Chile actually brightens up the place. I have mentioned before all the graffiti in Valparaiso, but it's not limited to one city - even Conce has some pretty cool artwork. Wandering around on the weekend, just enjoying the sunshine and some music through my earphones (to block out the noise of the city), there is far more than you realise. I walked from my house near the University of Concepcion down to Vega Monumental, the big fruit and veg market in the city. You can get a bus no problem, but I wanted to walk and enjoy the relative quiet that is Sunday here. Along the sides of, quite frankly, ugly apartment buildings, there is cool and imaginative graffiti turned art work. From the usual socialism/communism slogans and pictures of girls and boys from the factories chanting for better rights, to some guy called Kroma who does Banksy-style stenciling, to funky and strange things I'm not even sure what they are, to Mapuche icons and flags. Sometimes things here are strange and you're not sure why they happen or hey they work, but sometimes you just look at something and take it for what it is and appreciate it. 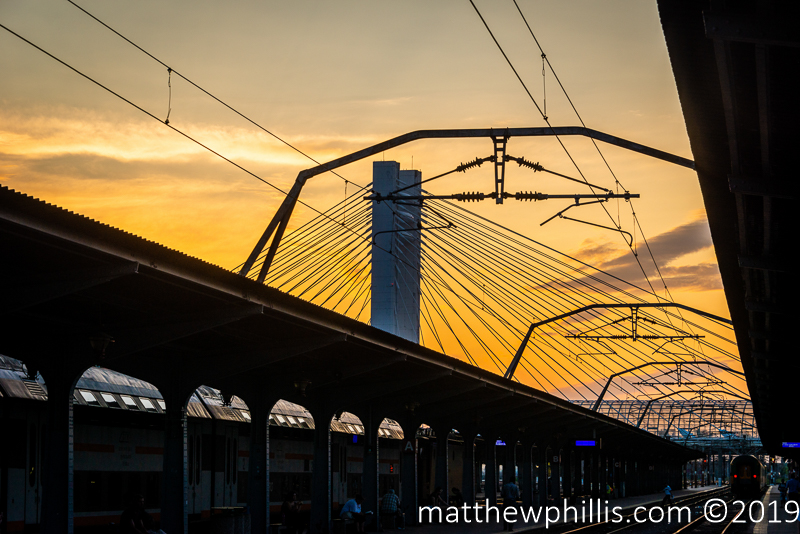